Give the people a break…

At least the impostor who wrote the article should have at least got it right!!!

Obviously there is a distinct difference between failures and fraudulent misrepresenting people who broadcast their lack of qualifications to even judge others by criteria about which they know nothing…Success!

But even more important…you must have a legitimate government to raise such concerns…and failing that…everything offered so far is moot. You got that? An American sovereign.

“You only think you know!” 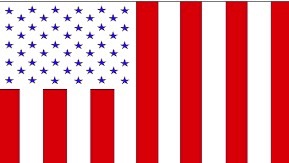 The flag of the Continental united States of America

When you say that ‘we have no documentation from the framers authorizing the Vattel version of a definition … (of nbC)’, please note that Article I, Section 8 says the ‘The Congress shall have Power To … define and punish … Offenses against the Law of Nations;’, and the Law of Nations defines natural born Citizens as:

1)    Those born in the country, of parents who are citizens;

2)    Those children naturally follow the condition of their fathers, and succeed to all their rights;

3)    The country of the fathers is therefore that of the children;

4)    In order to be of the country, it is necessary that a person be born of a father who is a citizen.

I would then add that, regarding Cruz (as well as Rubio and Jindal and Santorum and Haley), ‘What person with any moral character and proclaimed dedication to the Constitution would pretend not to know these simple facts, and attempt to usurp the Office of President by fraud, deception, dissembling and deceit – like the Marxist Muslim Kenyan fraud and imposter before him?’

So ‘Ted Cruz will be found to be a natural born citizen’ by anyone with an agenda to deny the truth and Constitutionally-defined meaning of a ‘natural born (U.S.) Citizen. And since such dissembling, deception, and deceit to facilitate usurpation of the Office of POTUS & CINC only lends aid and comfort to our enemies, it constitutes and act of TREASON.

In Liberty and In Truth.

Ted Cruz will always be found to be a natural born citizen, simply because of his mother’s citizenship and the 1780’s fact that we have no documentation from the framers authorizing the Vattel version of a definition. (Canadian law doesn’t matter, whether his parents filled whatever paperwork and filed it on time doesn’t, either.)

Meanwhile, this speaks of the crisis presented by Donald Trump, in the highly unlikely event he would be elected over a Democratic Party candidate:

Updated, below Expanded from American Thinker We may believe we know celebrities from the familiarity of their video appearances. But the persona we may get used to seeing is not necessarily the real, nor whole person. Some now see candidate Donald Trump’s public behavior and are quite concerned. Is he merely the benign if very outspoken rogue, as so often depicted by grinning pundits? A known quantity? I suggest no easy dismissal of … read more

It is for freedom that Christ has set us free. Stand firm, then,

and do not let yourselves be burdened again by a yoke of slavery.

You were bought with a price; do not become slaves of men.

— The Apostle Paul to Christians, Galatians 5:1, I Corinthians 7:23