Moving on we are diligently processing all the Notice functions and court work…..

Please find the copy of the letter accompanying the live affidavit being sent to the Common Law Citizen’s Grand Jury HQ and John Daresh.

Herein I explain one of the things that seems to be befuddling so many people about the Citizen’s Common Law Grand Jury Movement and why it can’t seem to gain traction despite all the brave words.

It’s really very simple. To enforce the presentments and indictments of a Common Law Grand Jury you need the rest of an apparatus of a Common Law Court System — Common Law Judges, Trial Juries, Sheriffs on the Land, Bailiffs, Clerks…..

This seems stupidly obvious when I say it out loud, but apparently the necessity of rebuilding on the Justices of the Peace at the County level and upon the very, very few State Common Law Judges that are operating Common Law Courts and the even fewer Federal Postal Judges—- has not yet occurred to everyone.

From the Desk of Judge Anna Maria Riezinger 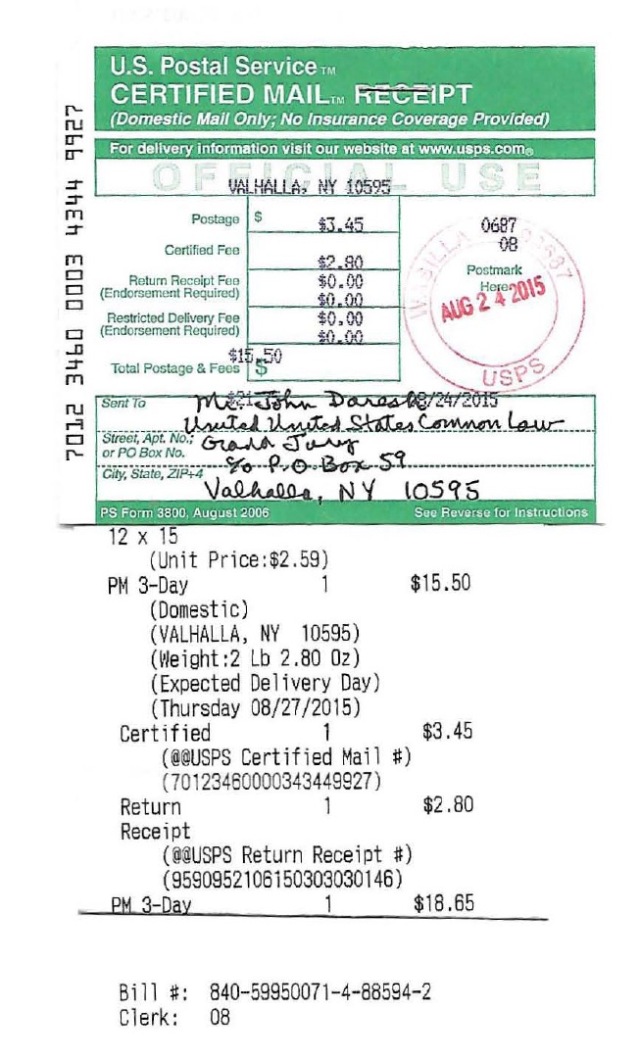 We attempted to deliver this published and bound Affidavit of Probable Cause to your Alaska Grand Jury Membership, but it was returned to us unopened and for unstated reasons.   We are therefore forwarding it to the National Headquarters.

This is a “live” Affidavit of Probable Cause containing original wet-ink signatures and individual seals of the living men and women and their organic states of the union.

As we have been watching your activities unfold we realize that you are laboring under some of the same misinformation that has been so much a part of the development of the present circumstance.

Please carefully read and examine the evidence and history presented by our affidavit. This will shed considerable light on the overall circumstance.

The Citizen’s Common Law Grand Jury stands as a lynch pin between two (2) completely separate Court Systems—- (1) the Continental Court System operating the land jurisdiction of the United States and the Several States on the Land which has existed for over 400 years and which is competent to render judgments under Article VII of The Constitution for the united States of America, and (2) the Federal Court System which came into being in 1789-90 and which operates the District and Federal “State of State” franchises we are familiar with.

The Citizen’s Common Law Jury is enabled to present charges against American State Citizens and Non-Citizen Nationals and indictments against United States Citizens.   Both.

The problem is that the Continental Court System has been left in disrepair and virtually abandoned, so that it appears that the only venue is the Federal Court System. And the Federal Court System operates exclusively in international and commercial and other foreign venues. Since 1938 there hasn’t been a federal Common Law Court of any kind at any level — which means that if we want to operate under Common Law we have to provide an entire Common Law System for ourselves—not just a Citizen’s Grand Jury, which is only a part — about one-fourth— of a Common Law Court.

To exercise the true power of the Citizen’s Common Law Grand Jury Americans have to rebuild the Continental Court System and restore our own standing as inhabitants of the land jurisdiction of the Continental United States.   This does not imply destroying the Federal Court System. It isn’t “either/or”—-but in order to work properly, our system of government requires that both court systems function and function well.

The essence of this dilemma is found in Erie Railroad v. Thompkins (1938) which determined that there is no general Federal Common Law. This means that for all practical purposes the Federal Court System including the Federal “State of State” and “County of” courts ceased functioning under Common Law and were forced to operate exclusively in the foreign and international jurisdictions of the Sea.

You have to call public meetings and elect people to office to staff the Continental Courts and start the process on a volunteer basis.   Our first meeting here in Alaska was held in my living room. The Alaska State Superior Court is one of only a handful of Common Law Courts operating in America. There need to be Common Law Courts re-established in every county and every State and at the national level, too.

The members of NLA and the Common Law Grand Jury Movement can form the core group needed to reboot the Continental Court System and bring justice back to America. It is only by our own efforts that this vital work can be done.

An important part of this process is coming to terms with your own status and standing.

In the absence of clear public declarations and evidence otherwise, everyone is presumed to be Federal United States Citizens. This is a completely different and foreign status than that of American State Citizens— which is what you think you are. You have unwittingly become subject to hidden contracts that have been exercised against us by foreign commercial interests and unscrupulous members of the American Bar Association.

To function honorably as members of the Citizens Grand Jury and as Judges, Sheriffs, and Officers of the Common Law Continental Court System as a whole, we must each take action to declare our status as American State Citizens and should also take action in the corporate “County of” probate courts to correct the civil records.

We are each protected in doing this by the Universal Right of Self-Declaration guaranteed by the United Nations and by the actual Constitution for the united States of America and by the Geneva Conventional Protocols of 1949. Exactly how and why this is true is discussed in the body of the accompanying affidavit.

Although this appears to be a comic book and is written at the 6th grade level for much of its content, you will find that the subject matter is very serious indeed. It outlines the important facts and motive forces of the past 700 years and incorporates them as the probable cause for both criminal and commercial complaints in behalf of the living people inhabiting much of the world and in particular the Several States.

Although I appear as one of the authors I do not appear in any judicial capacity. This is a private affidavit published on the public record for the cognizance of all Americans and all people worldwide who value the principles of freedom and their own Natural and Unalienable rights.

We hope that the NLA and Citizens Grand Juries will begin a serious re-appraisal of the situation and renew their efforts to educate everyone concerned.   We also hope that upon serious reflection you will see the necessity of rebuilding the Continental Court System as a whole to establish the only court system that is competent under Article VII to hear cases involving actual people and actual assets of the land jurisdiction.

If you find the information presented compelling, you are further invited to begin deliberation. Several international courts of record are already involved, but under the circumstance, it would be appropriate for the Citizens Grand Jury to be advised and enabled.