Below are just some of the issues by which we the people are attacked by the enemies of freedom.  The impostors, perpetrating these abuses are pretending to be our lawful government employees and agents.

Your help is requested to identify any that may have been missed.

Where applicable, we also seek to identify where possible, by what authority and by whose direction these threats, to public safety are being implemented.
(California Code: all in violation to most state Code,)

Please send any perspective issues not on the list to my attention:  arnie

You may find the list at the following link to be of help to provide them with a reason the 14th Amendment fraud is so important:

Even just within the last few days…Congress continues to act in fraud!

Vitter Amendment S.187 A TRAP – THERE IS NO 14TH AMENDMENT! The Courts and the Congress lied!

With the 14th Amendment exposed as a lie, none of the following abuses reported by Americans are being lawfully funded with your tax dollars.  Members of Congress who support this by ignoring the fraud are committing federal crimes by which they may be criminally charged.  These crimes unleashing the death and destruction on the people are outside of their lawful authority as public servants.  These crimes are committed while members of Congress are in their corporate capacities and impersonating the lawful government officers you elected.

You see, the 14th Amendment is not law.  It was exposed as fraud.  But the impostors in Washington and the rest of the franchised branches…  AKA the states, counties and cities are all illegally and unlawfully imposing this fraudulent legislation as though it was law.  This in itself is fraud on the people.

But this particular deceptive series of acts seems to affect every American and just about every aspect by which we are unlawfully being controlled and abused.

So our effort as the people is pretty simple. We force the fraud into the open and demand it be addressed and potentially break the back of the entire scam.  It all depends on the support of the people.  Download the following generic template, copy and paste into your own word processor, email application, make the appropriate adjustments and deliver to your state representative with a demand for action.  Pursuant to Title 18 U.S.C. § 4 generic

<LOL> Now where have you heard that before.  And the way this fraud has been applied it affects all levels of government from what I can tell.

When I leaned about this I visited the office of my assemblyman, Travis Allen, District 72 to report this crime as per 18 U.S. Code § 4 – Misprision of felony.

As I see it…Travis Allen sent me a letter via USPS  and violated his oath of office, his fiduciary responsibilities, openly committed misprision of felony, and treason.

Here is his own admission penned by his own hand on official letter head with what I believe is a wet ink signature. 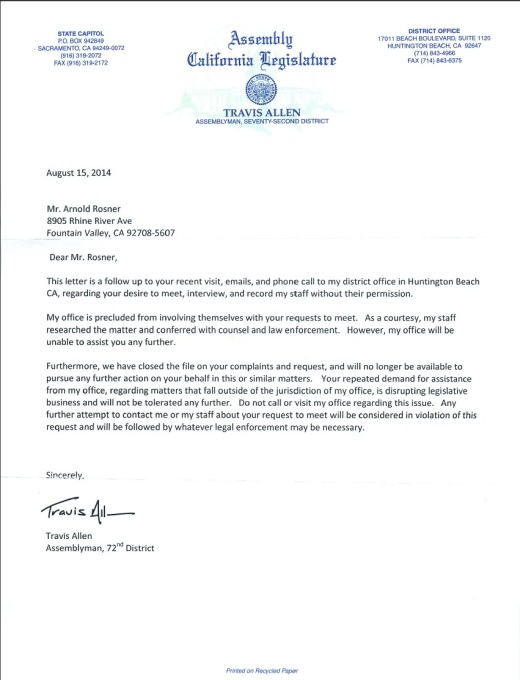 He also revealed the direct influence of the California BAR over our state legislators adding proof to me he is an impostor, impersonating a public servant. His personal threats to me would also implicate certain law enforcement agencies not as yet identified.

The link below lays out my attempts to work with what I believed until just recently, was my elected representative.

The affair goes on and implicates the controller of the state.  This makes me conclude he is also an impostor as is the entire state, county and city organizations.  Tie in what Rod Class discovered…
Rod Class Exposes State Governments are franchise branches of federal corporation posing as government of the American People.

This information would seem to make clear to even the most unsophisticated American, that our government is in the hands of impostors, unlawfully impersonating our lawful government agencies and agents.

American Civil Flag – at Peace since 1874