Travis Allen, Obviously a man well recognized by the media and local leadership who support his actions,  policies and behavior.
Travis Allen: The Assembly Legislator of the Year Award!

A man who, by all reasonable accounts, is always for the people. Well… That is… until you actually call on him to perform the work of the people…to honor his oath. But more on this below:

Mr. Travis Allen, elected to serve the American people of District 72, California, is a perfect example of one of those conservative candidates elevated to public service on the idea that new blood would cure the ills of a hopelessly corrupt state government.  Serving in just his second term, one might expect such a fine young representative of the people to act in a manner, consistent with the principles of the founders.

Hold on to that thought and review these few opportunities so you can judge for yourself. 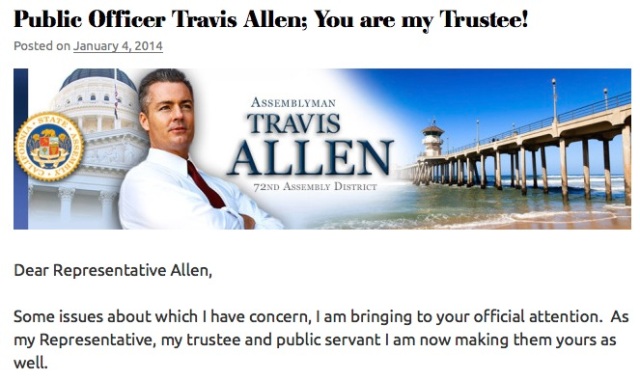 As an American, it is you who are responsible. Can you deny your obligation?

A serious opportunity presented to the assemblyman in accordance to 18 U.S. Code § 4 – Misprision of felony

Evidence of the criminal misrepresentation of the 14th Amendment!

A shocking and disturbing response on official letterhead and his wet ink signature.  The letter links the influence of the BAR and possible collusion with law enforcement.

This experience, reveals a very different Travis Allen than the one we are asked to accept.  A Travis Allen who would appear to be very politically expeditious and ambitious.  And a man willing to compromise his ethical principles, his oath of office and fiduciary responsibilities.

Mr. Allen exposed himself to me as the impostor he is.  He is only impersonating the lawful public servant for which he is taking money from the public treasury under false pretenses.