No one is ever held accountable?

One other really important point also comes to mind. Over time, the impostors in Washington…unlawfully impersonating officers of the people’s Congress, have managed to skew the responsibility of command or executive authority to others lower in the chain of command.  This becomes very apparent when you observe the manner in which Congressional investigations are conducted.

A view of the Fast and Furious investigations centered on when Holder, first became aware of certain aspects of this criminal enterprise that unraveled.  The same line of logic was used when “Big SIS” was interrogated.  Benghazi hearings produced the same patterns.  So..what is the problem with this logic?

Using a famous response from Clinton…”What difference does it make?”

Yes…what difference does it matter when the person responsible for the operation learned of any particular detail?

As the person responsible, they are in charge.  They are accountable.  It matters not what they know or don’t know or even when they knew it.

They are in charge.  it is their business to know.  They are being paid commensurate with the executive responsibility to know. Therefore the first move to be taken, depending on the nature of the problem, is for the person in charge to be removed from control over that area of responsibility.  As an example, in a case like Fast and Furious, Holder should have been immediate suspended from the DOJ pending the outcome of the Congressional investigation

Obviously permitting Holder to remain in power permitted him the opportunity to control the obvious coverup.  Come on folks, this is not the way to accountability.  We see this over and over and over.  The Wall street scandal also sound familiar?

a. Public service is a public trust, requiring employees to place loyalty to the Constitution, the laws, and ethical principles above private gain.  – http://ethics.od.nih.gov/principl.htm 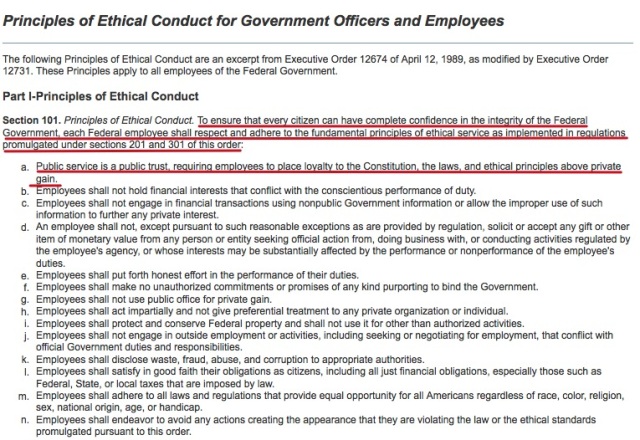 I am considering bringing criminal charges against you.

This is not the government of the American People.